South Africa, the world in one country

It’s sunny, warm and you’re lying on an untouched, fantastically beautiful sandy beach. A little later you drive through a pristine bush landscape when suddenly a huge herd of elephants crosses your path peacefully. Then you stand high on a rock and marvel at the incredible view that will take your breath away. Now you can look forward to the wonderful tasting in a world-famous wine-growing region. And you still have a whole day ahead of you in one of the most beautiful cities in the world. And you experience all this in one country! Where is that? Well, in South Africa!

Experience South Africa with all your senses

South Africa with its incredibly many and beautiful facets will inspire you!

Where is South Africa and what are the special features?

South Africa is located in the very south of Africa and borders both the Indian Ocean and the Atlantic. The neighboring countries to the north are Namibia, Botswana and Zimbabwe. Mozambique and Swaziland border to the north-east. The Kingdom of Lesotho is located entirely within the land border of South Africa. You can discover South Africa in many ways: in a guided (small) group tour, as a self-driver with a rental car or in an individual tour.

The best time to travel: What is the weather like in South Africa?

South Africa is a relatively dry country. Large parts of the country are subtropical – this means that the weather is usually pleasantly warm, balanced and sunny all year round. The Benguela Current runs along the west coast and is responsible for the extremely dry and slightly cool climate of the west coast. On the east coast, on the other hand, the climate is warm and humid, and the humidity is rather high.
In the winter period from June to August snow with temperatures around freezing point can sometimes occur on the Drakensberg or the city of Johannesburg.
The best time to travel to South Africa for hikers and nature lovers is usually the months of April and May – mild temperatures and low rainfall await travelers to South Africa. The rainy season in South Africa is over at this time of the year in the summer rainy areas and has not yet started in the winter rainy areas. 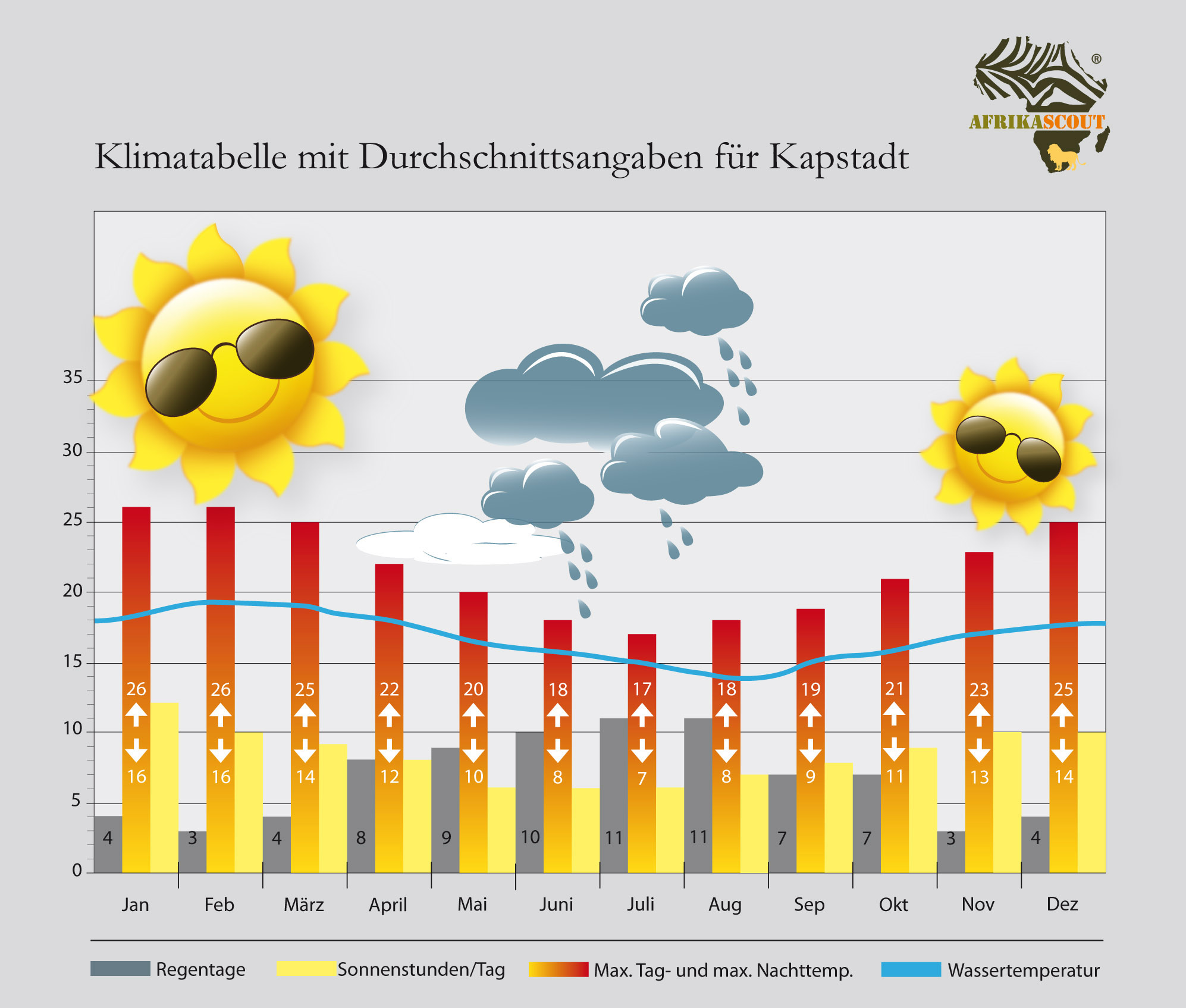 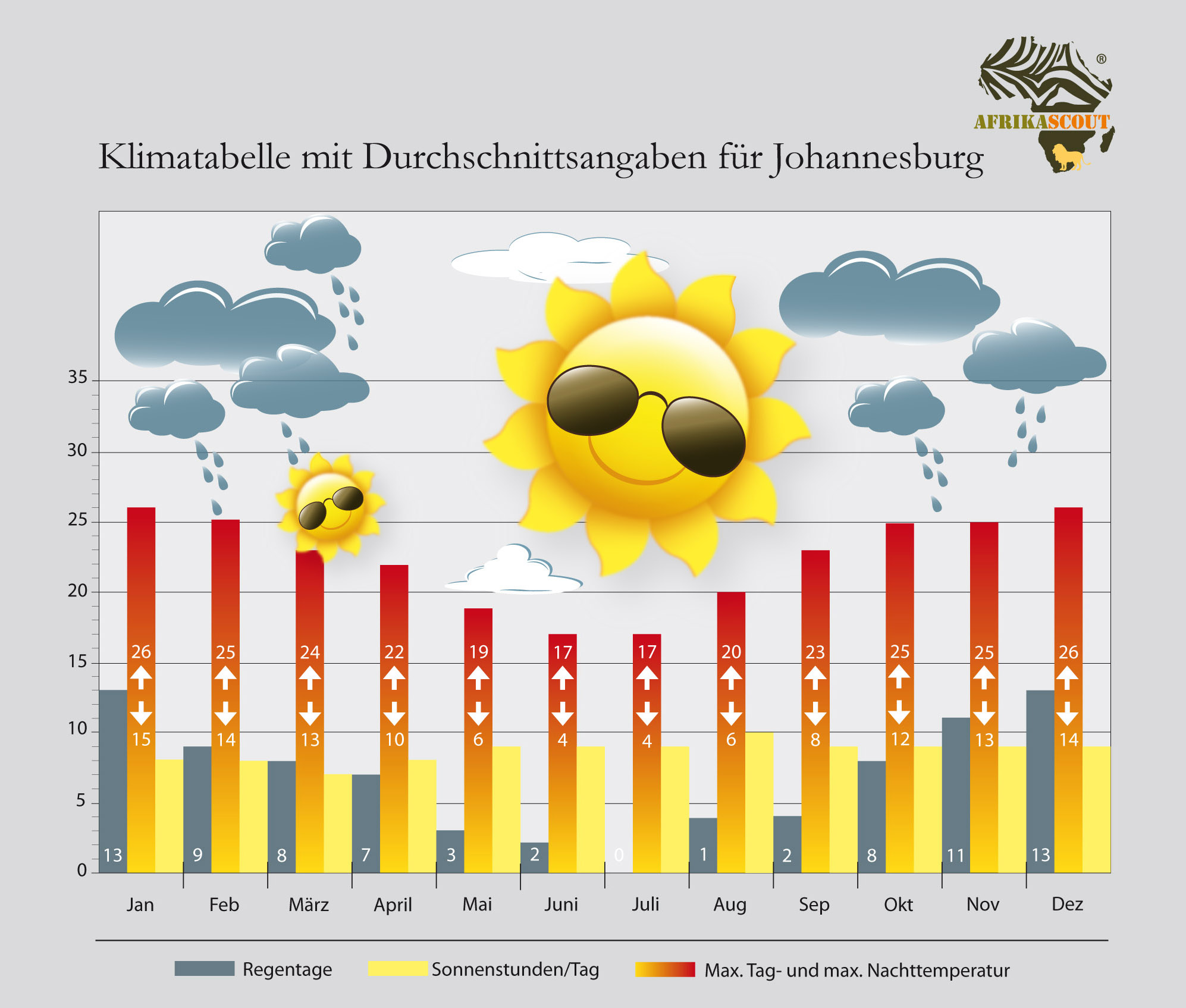 A safari through South Africa is ideal for the period from mid- June to mid-September – during the day it is mostly sunny and pleasantly warm, but it can get very cool at night. Mid-December to mid-March is mid-summer in South Africa. Especially inland, high and muggy temperatures are to be expected during this time. In addition, most tourist centers are overcrowded during this “Christmas” summer time and therefore the prices are higher than at other times of the year.

Who lives there in South Africa?

Ubuntu is an ancient African word meaning “I am because we are”. A word that stands for family and togetherness and that beautifully describes the colorful coexistence of cultures and nationalities in South Africa. Over 50 million people live here in the rainbow nation.
The country has three capitals: Pretoria is where the government sits, Parliament is in Cape Town and the Supreme Court of Appeal is in Bloemfontein. The lingua franca in South Africa is English, other official languages are Afrikaans and nine Bantu languages.

The largest national park in Africa is also one of the most famous in the world. Around 130 species of mammals live here, including the Big Five. Elephants, buffaloes, impalas, zebras, lions, giraffes, hippos, rhinos – on a safari here you can experience many highlights and great animal observations. Adjacent to the Kruger National Park you will find the wildlife sanctuary Sabi Sand Game Reserve , which is a little less frequented by tourists.

The wonderful Garden Route , named after the Garden of Eden, stretches 300 kilometers along the Indian Ocean. Through the impressive Drakensberg, past magnificent game reserves, through wonderfully wild nature and along the most beautiful stretches of coast.

Most people know the Big Five: lion, buffalo, rhino, leopard and elephant. The Addo Elephant Park also extends to marine areas and is therefore also home to whales and great white sharks. It is the only national park that houses the Big Seven. Especially between July and November countless right whales and humpback whales come to the coast. There are also African penguins, dolphins and Cape gannets here. Thanks to its elevated position at the end of the Garden Route, it is malaria-free, which also pleases many visitors.

Many say it is the most beautiful city in the world. We see it that way too! Cape Town nestles at the foot of the mighty Table Mountain and quite honestly: Don’t miss this fantastic view from up there! From the 1086 meter high plateau you have a brilliant view over the mountains, the sea and: Cape Town. There are so many sights and highlights here that we can’t even list them all!

South Africa has around 3,000 kilometers of coastline – enough space for fantastically beautiful beaches, secluded bays and unique surf spots! Heading east from Cape Town you come to the Eastern Cape, the “wild coast” on the warm Indian Ocean, a true beach paradise. It starts from Cape Agulhas . The highlights include the town of Wilderness with its eight kilometer long, white sandy beach, Plettenberg Bay, or “Plett” for short, a bay with five beautiful beaches, the world-famous surfing spot Jeffreys Bay and Boulders Beach with its African penguins.

According to current research, the Drakensberg should have inspired JRR Tolkien to “Lord of the Rings”. Well then: off to Middle-earth! One of the highlights of this impressive and breathtaking region is the Blyde River Canyon, a 26 km long gorge and one of the natural wonders of Africa. The best viewpoints are God’s Window and Bourke’s Luck Potholes .

Discover the great wine regions of South Africa! Stellenbosch, Franschoek, Montagu and Somerset West are not far from Cape Town and are a paradise for wine lovers from all over the world. Visit the Winelands, take a tour of one of the many wineries and enjoy a first class tasting!

The Kingdom of Eswatini (formerly: Swaziland) is a landlocked country in southern Africa, an absolute monarchy. It lies on a beautiful, scenically varied plateau of the Drakensberg. Here you can experience many original traditions and customs, all of which are still part of the daily life of the population. The country’s national park is one of the most biodiverse in southern Africa! The Kingdom of Lesotho , a parliamentary monarchy, is an enclave in the Republic of South Africa. At up to 1,800 meters above sea level, it is also high up in the mountains of South Africa, which is why it is also called the “Kingdom in Heaven”. A magnificent mountain panorama, remote villages and a traditional, warm-hearted population await you here.

At the foot of the Swartberg you will find the Grade I listed Cango Caves . These listed stalactite caves are among the most beautiful and largest stalactite cave systems in the world. An impressive natural wonder that will inspire you with its play of colors and its many shapes and rock formations!