Uganda, the “Pearl of Africa”

Winston Churchill once called Uganda the “Pearl of Africa” and you’ll quickly see why!
Feel the goosebumps when you look into the eyes of one of the last free-living mountain gorillas and pay an unforgettable visit to your closest relatives, the chimpanzees! Cross the equator, visit the sources of the Nile and the most beautiful national parks! Africa with all its facets awaits you, from the East African savannah to Central African tropical rainforest, snow-capped mountains and numerous lakes to the impenetrable and original mountain rainforest.

Why Uganda will inspire you:

Primeval forests, endless lakes, the sources of the Nile, extensive plantations and tropical rainforests make Uganda a green jewel in Africa. The animal world is also diverse. The highlight in Uganda are definitely the mountain gorillas, but there are also chimpanzees, lions, elephants, rhinos, antelopes, leopards and everything a safari heart desires. And you might even spot a herd of the famous Ankole cattle with their mighty horns along the side of the road.

Where is Uganda and what are the special features?

Located in the heart of Africa, Uganda borders South Sudan to the north, Kenya to the east and Tanzania to the south. Southwest lies Rwanda and in the west the country borders on the Democratic Republic of the Congo. The equator runs through the south of the country. It is a landlocked country, but there is no lack of water: in addition to many other lakes, a long stretch of coast of Lake Victoria also belongs to Uganda. In 1862, John Speke discovered a river access on the northern shore of the lake: the long-sought sources of the Nile. From here, the longest river in the world flows around 6,500 kilometers to the Mediterranean Sea. The East African Rift Valley also runs through Uganda, creating the Murchison Falls, Lake Albert and Lake Edward.

The best time to travel: What is the weather like in Uganda?

The climate in Uganda is balanced and tropical. The best time to travel to Uganda is during the dry season from June to September and from December to February. As far as temperatures are concerned, you can travel to Uganda all year round, as the climate is very temperate due to the altitude. Temperatures range between 25°C and 30°C all year round. The higher you go, the fresher it gets, sometimes it’s only 15 °C to 20 °C.
The rainy season in Uganda lasts from March to May and from October to November. Heavy rainfall can then occur, especially on Lake Victoria and in the mountains. 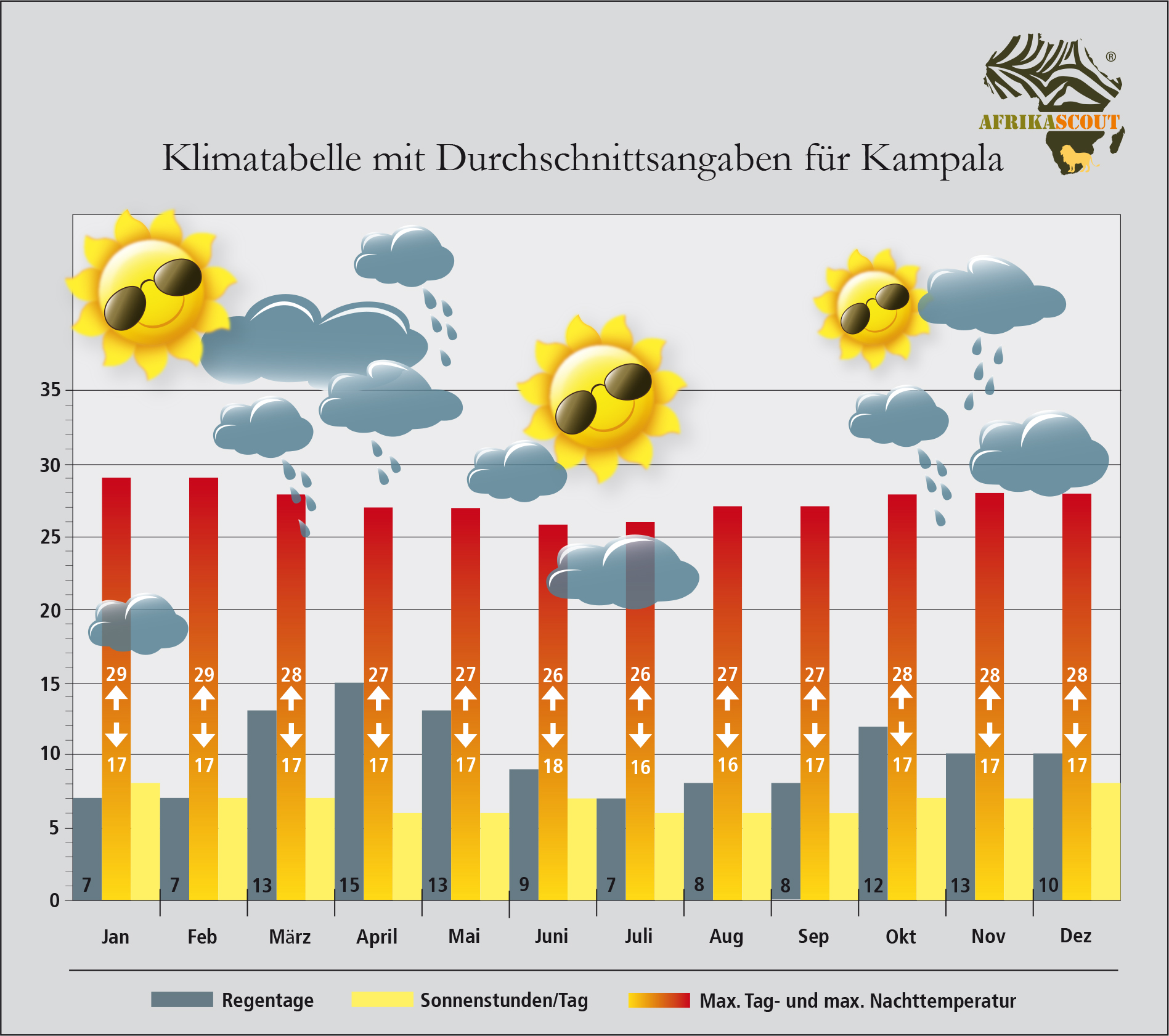 Who lives there in Uganda?

Travel Tips and Sights: The Highlights of Uganda

The native rainforest high up in the Virunga Mountains is one of the last refuges of free-roaming mountain gorillas. Visiting them with one of the experienced rangers is one of the absolute highlights that you can experience in Africa! Incidentally, children are only allowed to come here from a minimum age of 15 years. Another highlight in this region are the golden monkeys in the Mgahinga Gorilla National Park.

The UNESCO biosphere reserve awaits you with a unique flora and fauna. Here, in the oldest national park in Uganda, with a bit of luck you can see crowned cranes, shoebills, hippos, grass antelopes and many other animals on a boat tour along the Kanzinga Canal. But game drives here are also highly recommended, because elephants, antelopes and buffaloes as well as lions, hyenas and leopards also live here. The park lies at the foot of the Rwenzori Mountains, on Lake Edward and Lake George.

In Uganda’s largest protected area, the Murchison Falls National Park, the Victoria Nile makes its way through the gorges and the Murchison Falls, sometimes very noisily: the river forces its way through a gap about 7 meters wide and then plunges 40 meters deep. Around 500 bird species live in this beautiful national park, as well as the rare Rothschild giraffe (also: Uganda giraffe), lion, elephant, buffalo, leopard and the Uganda kob antelope. Most animals live in the savannah landscape in the north. We especially recommend the water safaris on the Victoria Nile, past crocodiles, hippos, shoebills and many other animals.

This beautiful lake was the romantic setting for the cult film “African Queen” starring Kathrin Hepburn and Humphrey Bogart, along with Murchison Falls National Park.

The smallest national park compared to the other savannah national parks in Uganda will inspire you with the numerous animals living here. Impala, buffalo, hippo, plains zebra, leopard, waterbuck and many more will walk in front of your camera with a bit of luck.

A lake as big as Bavaria and the largest lake in Africa. Numerous hippos and around 250 species of fish live here. Many of the exotic beauties are otherwise only known from aquariums. And with a bit of luck you can also see Uganda’s heraldic animal, the crowned crane.

The white rhino has been extinct in the wild since 1997. Here in this sanctuary they are released back into the wild in their original natural environment.

The legendary and snow-capped Ruwenzori Mountains are also called Moon Mountains and have been a UNESCO World Heritage Site since 1994. The Margherita peak (also: Margherita Peak or Mount Stanley) is the highest point in the country at 5,109 meters. Here, in this 48 km wide mountain range, a unique landscape with a rich and diverse animal world has developed. Here is also one of the sources of the Nile.