Thundering, misty masses of water plunge 100 meters into the depths. Ancient witnesses made of stone tell of long-gone cultures. Almost untouched national parks are home to countless wild animals. Zimbabwe offers a unique combination of natural wonders, safari adventures and historical sites. Zimbabwe has it all: explore this beautiful country by 4×4, on foot and on board a boat on the Zambezi or Lake Kariba. Join us on an unforgettable adventure in this fascinating country, which is far too often underestimated as a travel destination.

Zimbabwe will inspire you!

A lake as wide as the sea: Lake Kariba is just one of the highlights of this wonderful country. Enjoy the stillness, tranquility and reset all your systems while enjoying a cruise across this vast lake. Pure relaxation, we can confirm that from our own experience! And the sunset – uniquely beautiful, you have to see it with your own eyes. You also have to experience the mighty and impressive Victoria Falls, almost something like Zimbabwe’s landmark. You love safari and want to experience the wild animals of Africa in their natural environment? This is also wonderful in Zimbabwe: Because here you will also find huge, animal-rich national parks where you can go on exciting game drives.

Where is Zimbabwe located and what are the key facts?

Zimbabwe or English: Zimbabwe is about the size of Germany and Belgium together. The landlocked country is in south-east Africa, between Zambia, Mozambique, South Africa and Botswana. Did you know that the word comes from the Shona language and translated means “stone houses”? The name goes back to the Great Zimbabwe ruins, the largest pre-cononial stone structures in southern Africa. The capital of Zimbabwe is Harare. The country was once considered the breadbasket of Africa. Today, the country is facing major economic challenges, which not only go back to the colonial era, but also to the 30-year dictatorship under Mugabe, which ended in 2017.

How is it in Zimabwe?

In Zimbabwe you will mainly find dry savannas with Miombo and Mopane forests. You will also often see baobab trees, umbrella acacias and liver sausage trees. The grass of the savannah is brown and withers in the dry season – but towards the end of the rainy season it can grow up to two meters tall!

When is the best time to travel: What is the weather like in Zimbabwe?

The climate in Zimbabwe is subtropical to tropical. The summer, and with it the rainy season, lasts from November to March and is muggy and hot with temperatures of over 35 °C. The dry season in winter is a pleasant 25°C warm. However, a large part of the country is located at higher altitudes, where it is a nice 25 to 30 °C warm even in summer. In winter, however, you sometimes have to experience short night frosts down to -5 °C.
The best time to visit Zimbabwe is from March to November when it is winter and dry season there. However, if you want to see the Victoria Falls in all their glory, then you need to come during or just after the rainy season (November to March). 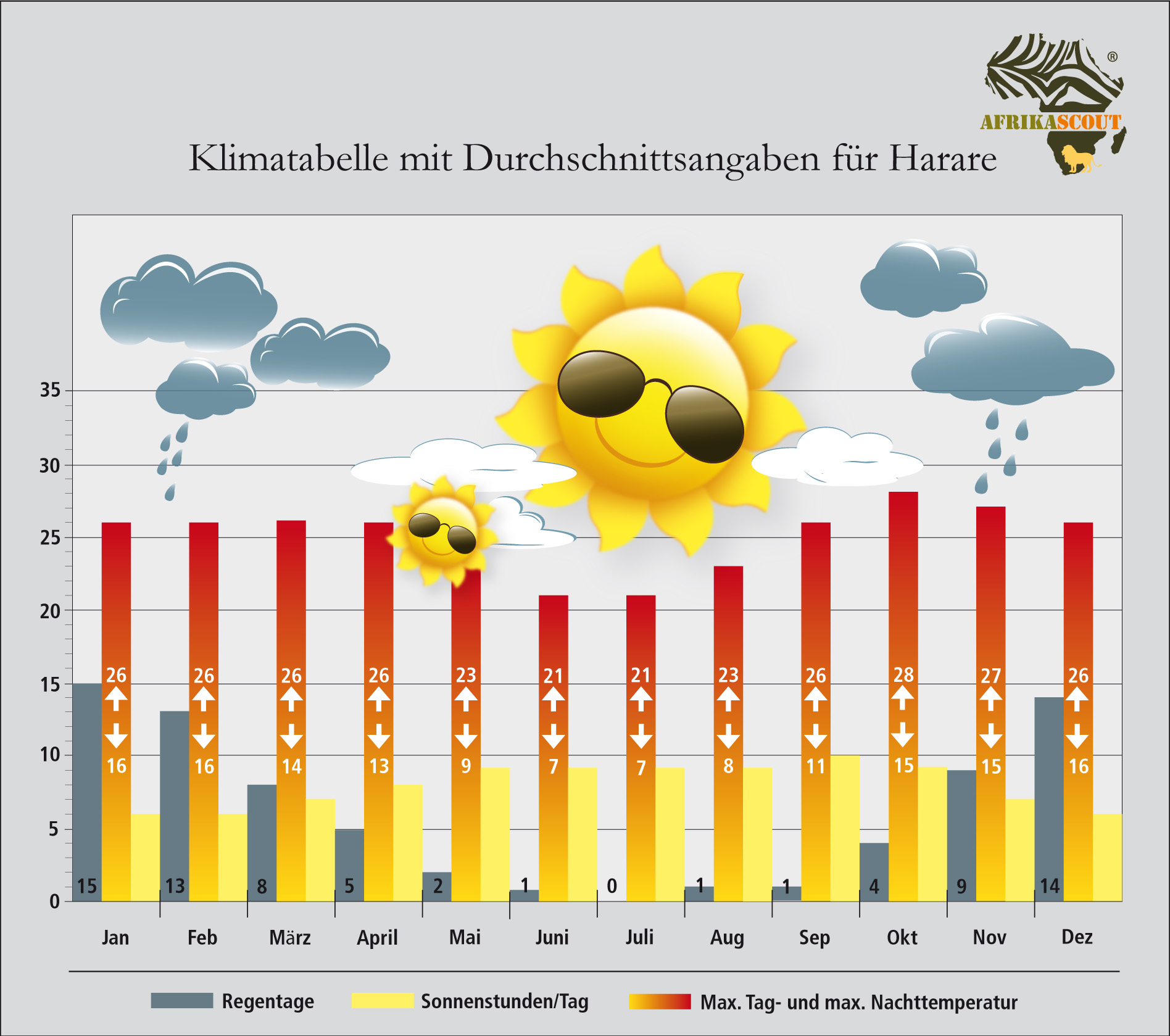 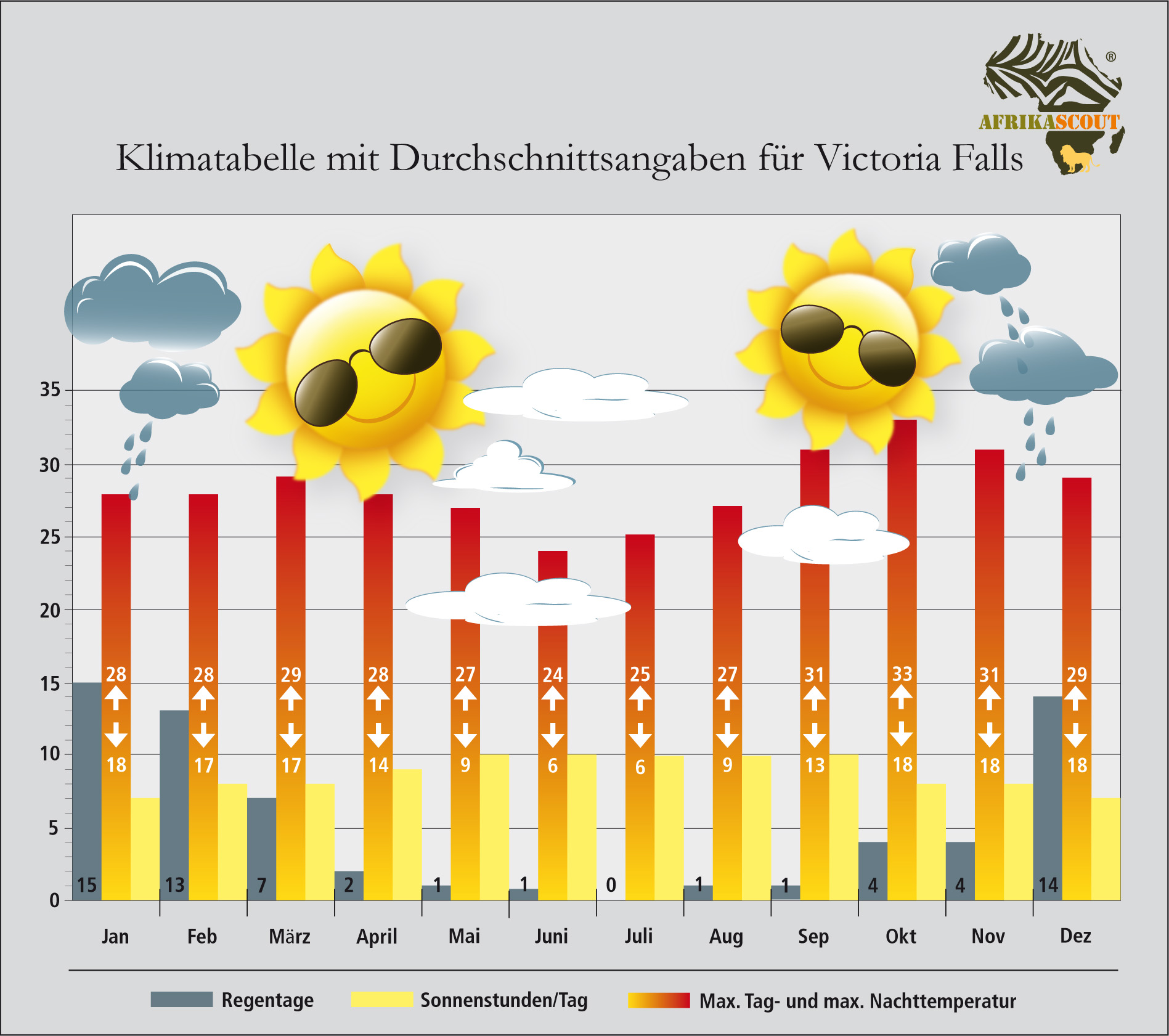 Who lives in Zimbabwe?

Around 16.5 million people love here, the majority (70%) of them belong to the Shona. About 13% belong to the Ndebele and 6% are the Chewa. There are also several small ethnic groups such as the Tong on the Zambezi and the Tsonga and the Venda in southern Zimbabwe. Between 90 and 95% of the population are Christians. In the 19th century, white farmers also immigrated from Great Britain and South Africa. At that time the country was a British colony and was called Southern Rhodesia, after Cecil Rhodes. In 1980 the country became independent and many white farmers emigrated. Since the 2013 constitutional amendment, Zimbabwe has had 16 official languages, which includes English.

Tips, highlights and sights: You must have seen this in Zimbabwe

One of Zimbabwe’s most famous sights, Victoria Falls is one of the seven natural changers on earth. Is he on your bucket list too? The locals call them “Mosi oa Tunya” – thunderous smoke that plummets about 108 meters into the gorge. The fine mist of the mighty waterfall sometimes rises far above the rainforest that has grown around the water masses. You can explore the area on beautiful trails with great viewpoints around the waterfall and across the rainforest – and don’t forget your rain jacket and your camera! Especially in the afternoon, when the sun is low in the sky, several rainbows often form in the spray.

Discover the stone witnesses of a culture long gone: The stone ruins of the Great Zimbabwe Monument date from the 11th to the 14th century and were the center of the Munhumutapa empire. The current UNESCO World Heritage site was originally built by the Shona, without scaffolding and without mortar joints.

The Hwange National Park is the largest national park in Zimbabwe and is known for its great biodiversity. This is also where the Painted Dog Conservation Center is located, which works to protect the endangered wild dogs. In addition, around 50,000 elephants and a total of over 100 species of mammals and 400 species of birds live here, including the Big Five. Keep your camera ready, you will surely find great opportunities for beautiful animal photos here!

Another beautiful and wildlife-rich area in Zimbabwe is the Mana Pools National Park . You can reach it, for example, with a river trip across the Zambezi. Already during the journey you glide past hippos, elephants and crocodiles. Many other wild animal species also live in the park.

Cecil Rhodes, who is also buried here, called the views in the national park in the Matobo Mountains “View of the World”. But not only the view is overwhelming, the “balancing” stones are also fascinating. The caves below are no less exciting: there are numerous sites of beautiful and ancient rock paintings by the San tribe.

It takes 24 hours by ferry to cross Lake Kariba . Don’t miss this great event, the reservoir on the border with Zambia is one of the largest on earth and is just beautiful! Enjoy a sundowner on board the ship while the sun seems to sink into the lake in front of you.