Botswana, the diamond of Africa

Heavenly Okavango Delta. Fascinating Kalahari desert. Stunning Victoria Falls. Huge salt pans. One highlight is better than the other – and all of this can only be found in one country: in Botswana, Africa’s diamond.

Now imagine an impressive drumbeat and then see a huge herd of elephants peacefully crossing the road right in front of you in front of your inner eyes. Pure goosebumps, right? Welcome to Botswana!

This is why you will love Botswana

Botswana is one of the most colorful countries in Africa: seemingly endless expanses and the impressive wilderness will inspire you. The diverse flora and fauna of Botswana will make your trip an unforgettable experience. Around 38 percent of the country’s area is national parks and reserves. And we think that’s particularly great: There is a complete ban on trophy hunting throughout Botswana. This is probably one of the reasons why the country is home to almost half of the world’s savannah elephant population. The country also runs comprehensive conservation programs for other species such as white and black rhinos, African wild dogs, cheetahs, lions and more. The reward: In 2017 the country was named “Best sustainable Destination of the Year” by the World Travel and Tourism Council.

Where is Botswana and what is it like there?

About the size of France, Botswana is located in the heart of southern Africa, nestled between the countries of Namibia, Zambia, Zimbabwe and South Africa. The semi-desert Kalahari in southern Botswana takes up around 70 percent of the country. Thorn and grass savannas and dry salt pans predominate here. But during the rainy season, these pans turn into large, shallow lakes – an impressive and unforgettable experience. One of the absolute highlights in Botswana is the Okavango Delta. The largest inland river delta in the world is one of the greatest natural paradises on earth, you really have to see it with your own eyes. Don’t miss gliding in a mokoro through the reed- and palm-fringed pond of water. There is no better way to let Botswana affect you!

The best travel weather: What is the weather like in Botswana?

Summer in Botswana lasts from October to April – in “high summer”, i.e. in December and January, temperatures can climb up to 40°C. It is winter in Botswana from May to September, in July and July it can get cold here at night to below 0°C.
The rainy season is from December to March.
The best time to visit Botswana is springtime in September and October. During this time, the daytime temperature is between 25 and 30 degrees. Due to the dry season, many animals gather at the waterholes to drink water during these months – wildlife observation is guaranteed at this time of year. 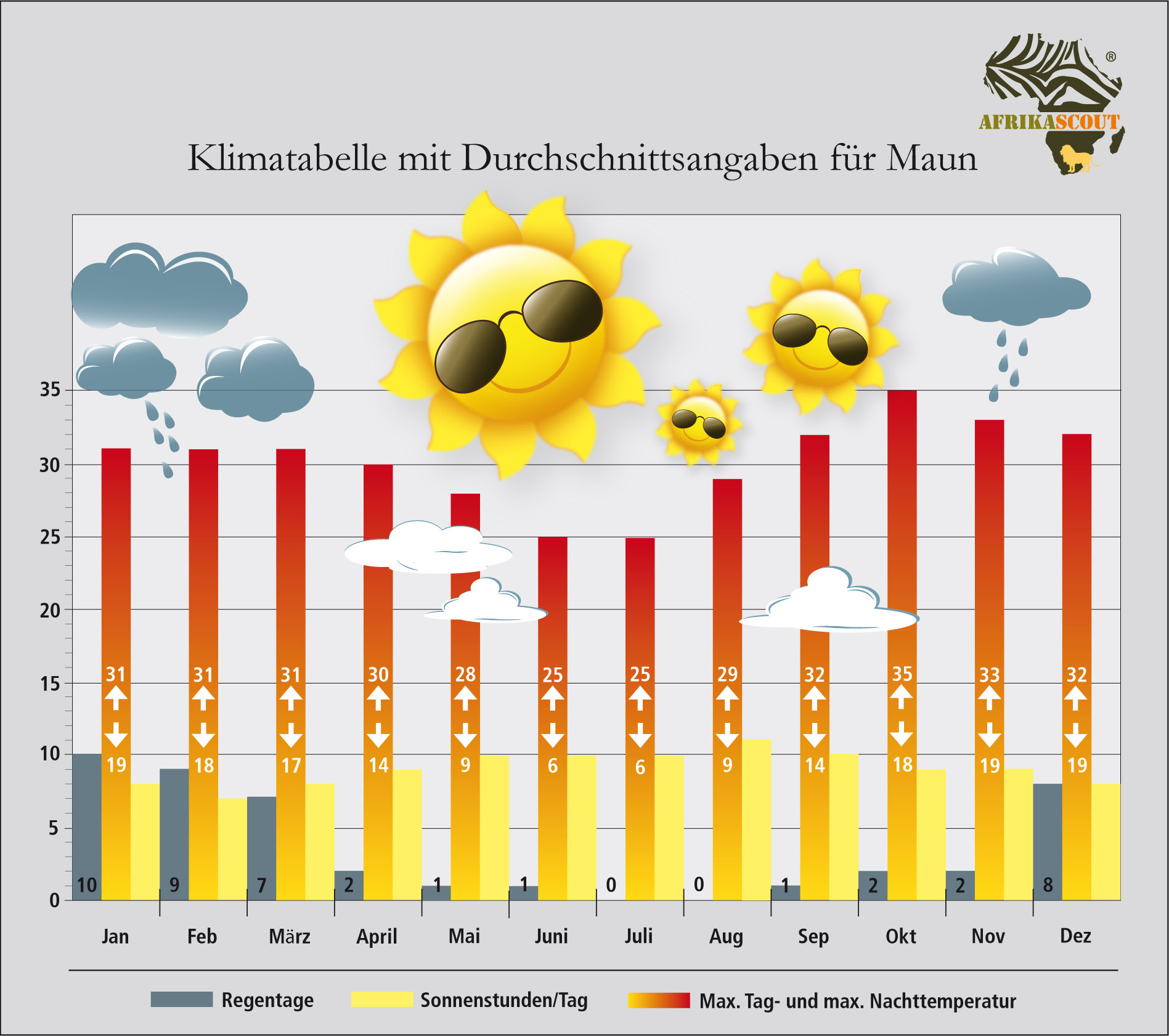 Who lives there in Botswana?

Around 2 million people live in Botswana, the majority of whom belong to the Tswana ethnic group. The first inhabitants of the country were the Barsawa (San), originally a hunter-gatherer people. They immigrated in the 4th century. They were followed by the Tswana from East Africa in the 16th century. At the beginning of the 19th century, the Tswana felt threatened by the Boers and Zulus. They asked the British for help, who put the area under British protectorate as “Bechuanaland” in 1885. The country only became an independent republic again in 1966. The national language is Setswana, the official language is English.

Tips and Sights: The highlights in Botswana

As already mentioned: On the one hand there is the great Okavango Delta . Along with boat safaris and land game drives, one of the biggest highlights is a flight over the delta – incredible! In small planes or in a hot-air balloon, you can observe and enjoy the labyrinth of rivers, vast forest areas and a wide variety of animal species from the air. Our special tip: Be sure to stay at Gunn’s Camp, one of the last traditional, classic safari camps in the delta. It borders the Moremi Game Reserve overlooking Chief’s Island. You’ll spend the night under palm and ebony trees in luxury tents with bathrooms and private viewing terraces. Hidden tightly in the bush, they offer the necessary space for rest and relaxation. You can also book boat trips through various canals or a bush walk here. Brilliant!

If you want to see elephants, we recommend a visit to Chobe National Park . An estimated 120,000 of the gentle giants live here. The Chobe River also attracts large herds of Cape Buffalo and Zebra.

Another highlight are the already mentioned salt pans. They are called Makgadikgadi Pans and together they are as big as the country of Portugal! You have to imagine this! The pans were once great lakes that have now become endless expanses of brilliant white. Only during the rainy season do some fill with life-giving water and become a habitat for migratory birds and migratory herds. This area includes the well-known Nxai Pans – birthplace of thousands of zebras that give birth there during the rainy season. Incidentally, since we are far away from civilization and thus from artificial light sources, you will see a starry sky here that you have certainly never seen before!

And while we’re far away from civilization, let’s take a look at the most untouched game reserve in southern Africa: the Central Kalahari Game Reserve . With 52,800 square kilometers it is also one of the largest protected areas. Endless expanses where you can feel pure freedom. And a paradise for numerous species of animals looking for food.