Malawi, the green paradise of Africa

A paradise for the explorer in you: The deep blue, glittering Lake Malawi stretches almost endlessly in front of you. Exotic birds chirp in competition. It’s much nicer than you imagined. The perfect place to enjoy some rest after exciting and thrilling safaris in Malawi’s national parks. For example, while you experience one of the most beautiful sunsets in Africa on one of the fantastically beautiful beaches.

This is why you will love Malawi

Malawi is off the beaten track in Africa. The glittering Lake Malawi, the original and varied landscape and a diverse and fascinating animal world will inspire you. That is why Malawi is perfect for individual trips with rental cars and small group trips. The people are incredibly hospitable and Lake Malawi is a paradise for diving and snorkeling with an incredible abundance of beautiful tropical fish. From the highlands you can let your eyes wander far over the savannas and plateaus and experience the animal and plant world of Malawi in the various national parks.

Where is Malawi and what is it like there?

The small country of Malawi is located in south-east Africa. It borders with Tanzania to the north, Zambia to the south and southwest, and Mozambique to the east. Malawi is a landlocked country in the interior of Africa, but there is still a lot of water: Malawi includes Lake Malawi, the third largest lake in Africa, which occupies a quarter of the country’s area.
While the north of the country is rather mountainous, the center of the country lies on a fertile plateau, around 1,000 meters above sea level. Here the residents of Malawi grow tobacco, tea and coffee. If you travel further south, you will pass large tea plantations and finally reach the 3,000 meter high Mulanye massif. The summit of Sapita rises 3,002 meters high and here is also the highest rock face in Africa.

When is the best time to travel: What is the weather like in Malawi?

The climate in Malawi is subtropical. The rainy season lasts from November to April, it can get oppressively humid with very high humidity, temperatures are between 19 °C and 32 °C. This is followed by the post-rainy season in April and May. It is relatively cooler from May to mid-August, between 14 °C and 24 °C, with July being the coolest. Then the nights can actually get cold, especially in the mountains. After that, it gets hot from mid-August to November.
The best time to travel to Malawi is the dry period from May to September. This time of year is also perfect for animal watching. 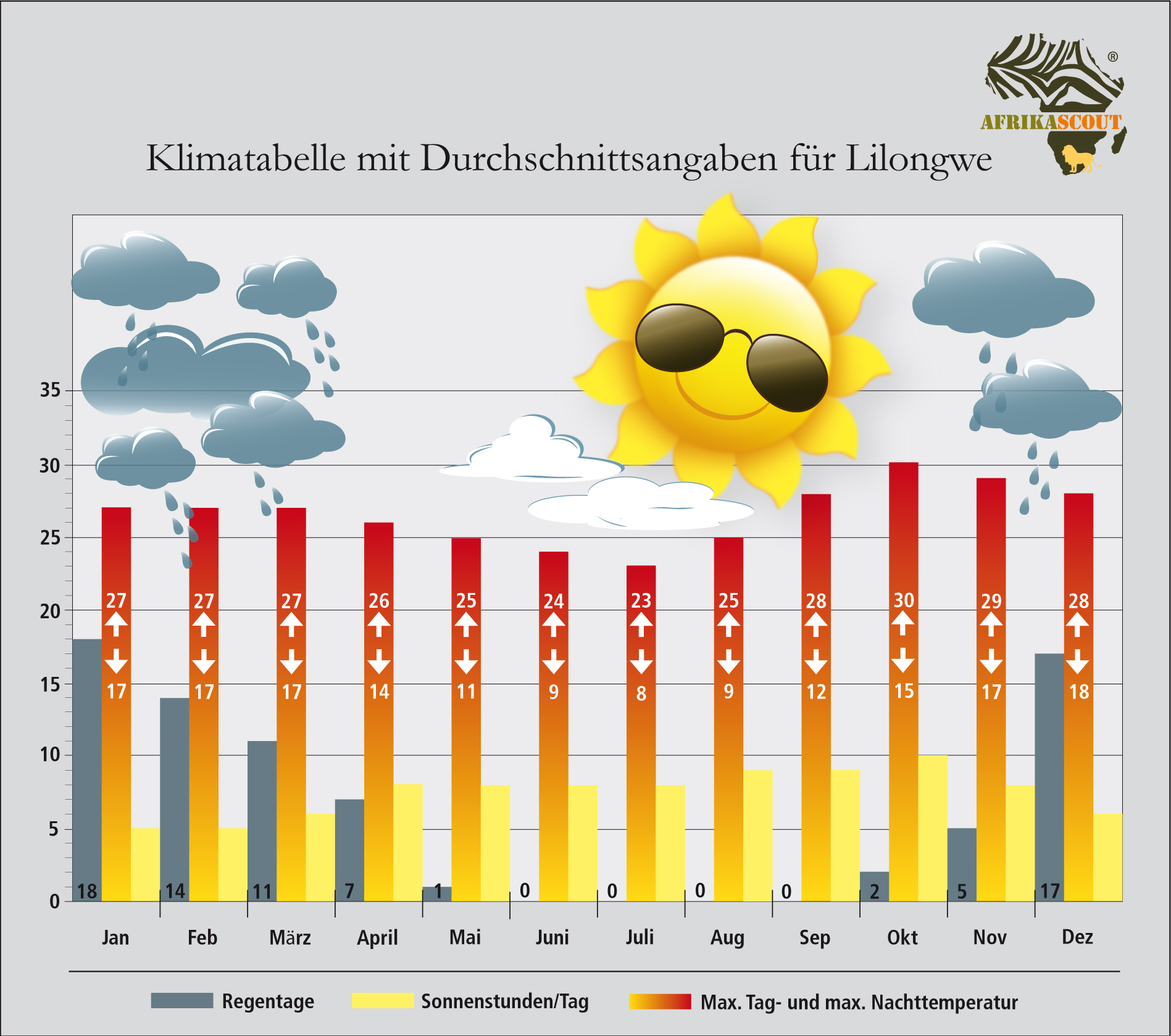 Who lives there in Malawi?

Around 18 million people belonging to different Bantu peoples live in Malawi. More than a third make up the Chewa, who once founded a kingdom in Malawi. Their language, Chichewa, is the official language alongside English. The language of the smaller peoples is also taught at school in the school.
Among other things, Malawi was a British colony until the country gained independence in 1964.

Highlights, Tips & Sights: You must have seen this in Malawi

If you travel to Malawi, one thing is definitely on the list: Lake Malawi. It is the most species-rich lake on earth! Since the lake is located in the East African Rift Valley, there are places that are up to 700 meters deep. Hippos, crocodiles, monitor lizards and sea pythons and over 1,500 species of fish live here. Many of the species are endemic, meaning they only occur here. Lake Malawi is considered a diving paradise because it is one of the clearest lakes on earth. You can also go canoeing, water-skiing, sailing boats or traditional dhow trips.

The beaches on Lake Malawi are legendary. It is particularly beautiful on the Nankumba Peninsula, on Mumbo Island or the islands of Chizumulu and Likoma, which still belong to Malawi but lie on the part of the lake that belongs to Mozambique.

Kasungu National Park has the largest elephant population in Malawi. It is the second largest national park in the country. The best wildlife viewing spots in Kasungu National Park are along the many rivers that flow through this park. In addition to elephants, many antelopes, buffaloes and zebras can be observed there.

Monkey Bay is located on the southern shore of Lake Malawi and is part of Lake Malawi National Park. This legendary bay is a diver’s paradise, with an incredible biodiversity and a truly beautiful landscape. As the name suggests, numerous monkeys live here, including baboons.

A guarantee for impressive holiday photos: the water plunges more than 80 meters into the depths, which is of course a very special experience during or shortly after the rainy season.

Natural pools, waterfalls and rivers criss-cross this mountain range, crowned by the 3,002 high Sapiwa peak. Go on extensive exploration tours with an experienced guide, enjoy the view and then taste the tea that is grown below the plateau and experience a completely different Malawi than that of the tropical beaches with a Caribbean flair.

Spot elephants, leopards, antelopes and rhinos on an exciting 4×4 safari! Explore the picturesque river landscape by boat, spot monkeys, crocodiles, hippos, buffalo, hyenas and more. A highlight is the sanctuary for black rhinos: Here you can experience how the rare animals are raised.

Leave everyday life behind and immerse yourself in nature: this works perfectly here. Numerous vantage points as well as waterfalls, rivers and reservoirs run through the forest reserve. With a bit of luck, spot monkeys, otters, birds and butterflies. Guides will take you directly to this beautiful reserve in vehicles.