Mozambique, the pearl of the Indian Ocean

Bem vindo a Mozambique! White sandy beaches as far as the eye can see, tropical coral reefs and pristine mangrove forests: the coast of Mozambique is an exotic paradise. Here peaceful and massive mammals graze even under water: the manatees, or dugongs, which are related to the elephants.

Fantastic coral reefs, home to numerous rare tropical sea creatures, await off the coast of Mozambique. There are only a few coasts in the world where such wonderful and well-preserved coral reefs can be found. It is the combination of this diving paradise and the beautiful beaches that give the coasts of Mozambique their magic. This also applies to the islands of Magaruk, Benguerua and Bazaruto off the Mozambique coast: a great diversity of underwater species, dreamy white beaches and impressively beautiful coral reefs make these places true paradises for everyone looking for rest and relaxation on and in the water.

Where is Mozambique and what is it like there?

Mozambique is about twice the size of Germany and is located in East Africa on the Indian Ocean. The fantastically beautiful coastline is a total of 2800 kilometers long. This is where the Mozambique Channel separates the island nation of Madagascar from the mainland. In the north, Mozambique borders on Tanzania and Malawi, in the south lie South Africa and Swaziland. Those who travel west come to Zimbabwe and Zambia. (All countries link to the country descriptions!) Part of the country consists of lowlands with dry savannas, which merge into the coastal strip. The mighty Zambezi flows through the middle of the country to finally flow into the Indian Ocean. South of the estuary, bays, coastlines with lagoons and dunes line up like precious pearls. In the north and west, the plateau joins the lowlands, with forest landscapes, plateaus and mountain ranges that belong to the Great Rift Valley.

When is the best time to travel: What is the weather like in Mozambique? 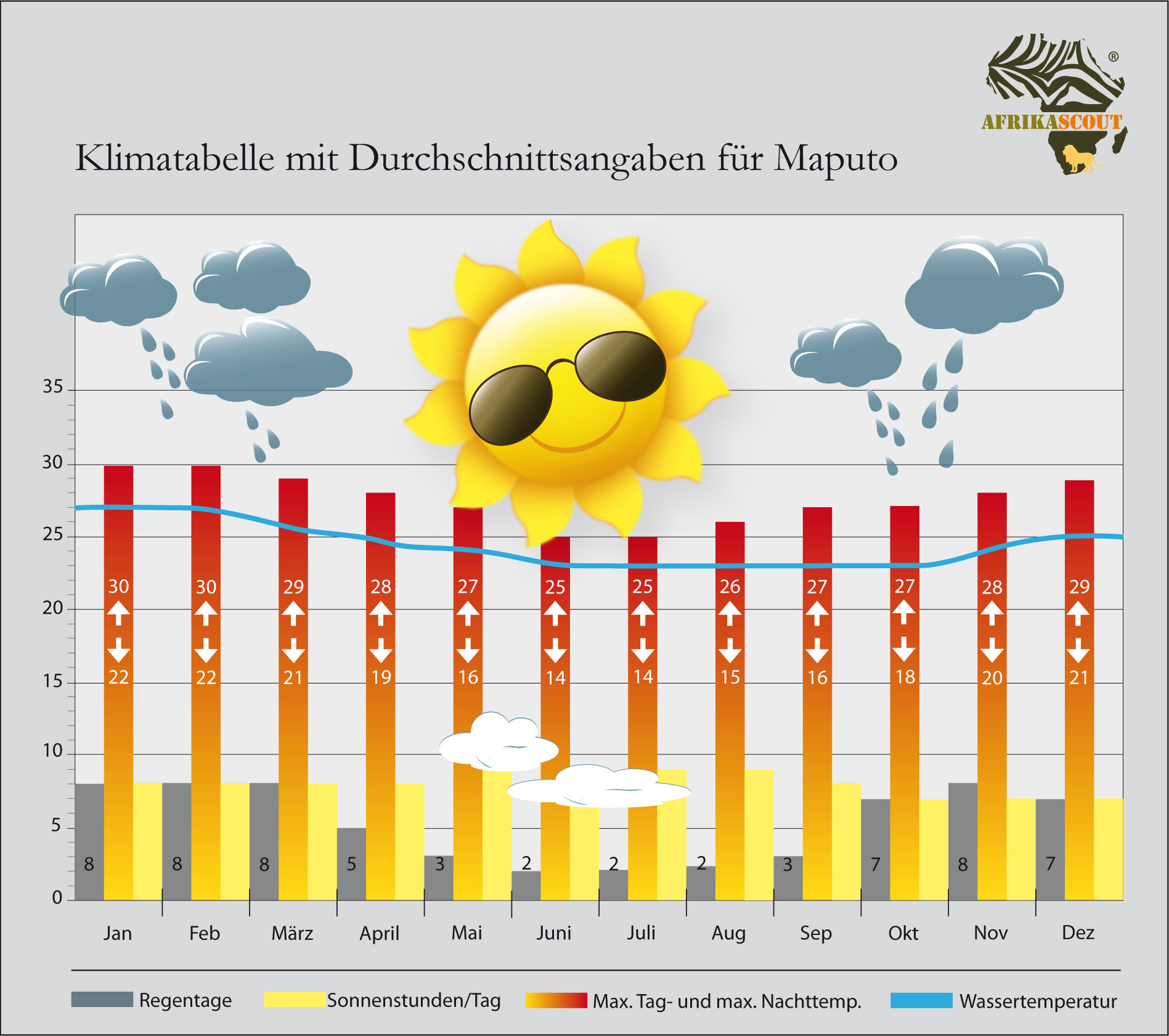 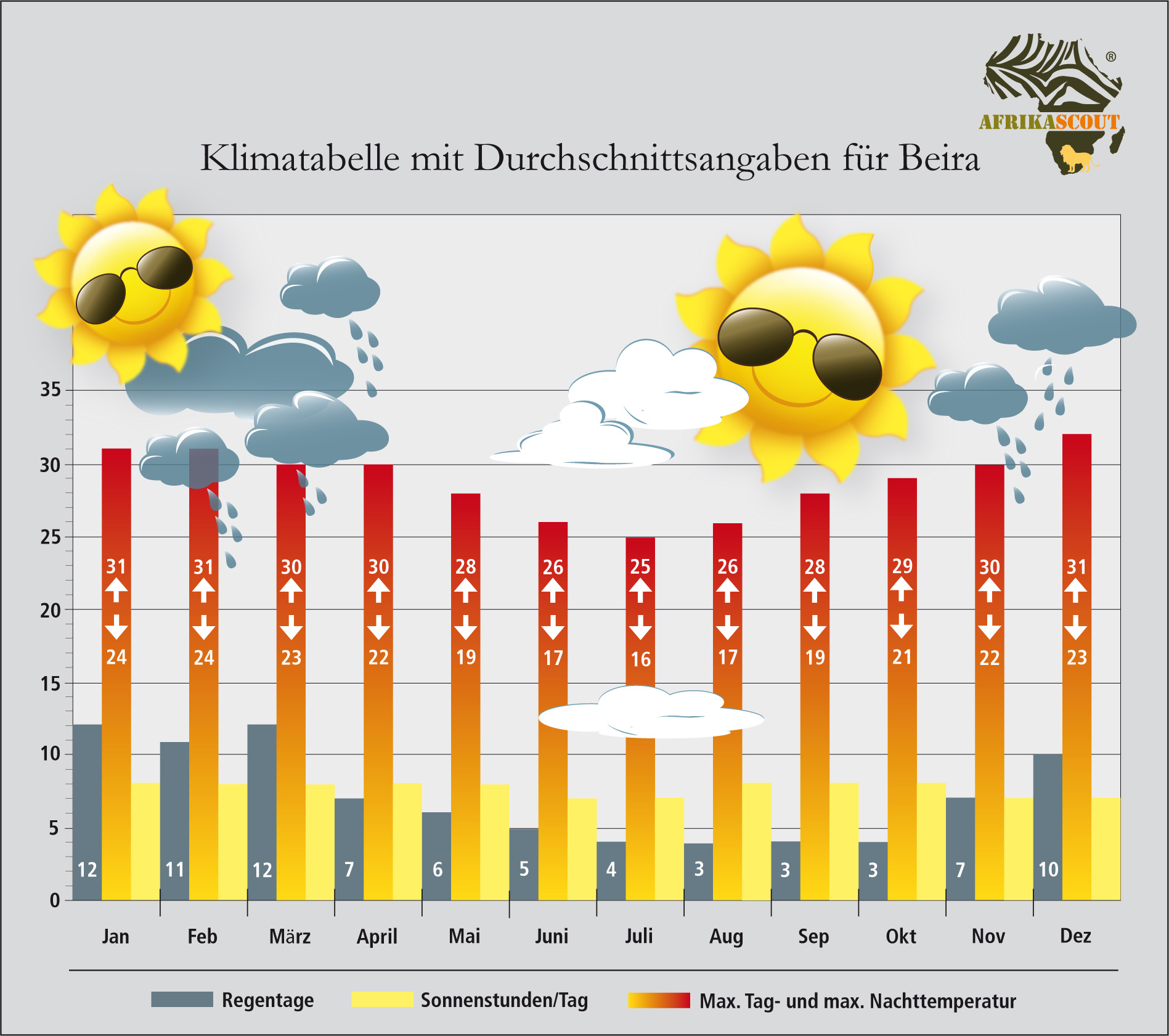 Who lives there in Mozambique?

More than 70 tribes live in Mozambique, most of them Bantu people. About 40 percent belong to the Makua, more than 20 percent are Tsunga, 12 percent Malawi and 11 percent Shoa. In colonial times it was occupied by the Portuguese. Portuguese is still the official language of the country, and more than 40 languages are spoken here.

Tips, sights and highlights of Mozambique

The beautiful archipelago is located in northern Mozambique, an archipelago of 32 islands. The UNESCO World Heritage Site is home to many rare animals and is known for beautiful sandy beaches and crystal-clear, turquoise water. A little paradise! And also underwater a true tropical treasure chest awaits you, through which whale sharks and dolphins roam. One of the islands is the Ilha de Mocambique. In this picturesque place, many buildings have stood the test of time and tell of days gone by. Like the old Portuguese fortress of San Sebastian, whose stones were shipped across the ocean from Portugal.

The park is one of the country’s largest national parks and a revelation for bird lovers: more than 500 species of birds live here, almost all birds found in southern Africa. Not only that, the park is also home to numerous large game animals such as elephants, lions, rhinos, leopards and more. This park used to be one of the most biodiverse parks in all of Africa before large parts of it were destroyed during the civil war and much of the population fell victim to poaching. The park has been protected from poaching since 1994 and the population has slowly recovered.

The name already gives it away: Elephants live here, and very special elephants at that. They are larger and have excellent memories that are passed down through generations. During the war years, some herds left the country and miraculously returned to their former homeland after the war. How did they do it and how did they know the war was over? Only the elephants know that. In addition, leopards, crocodiles, jackals, flamingos and many other wild animals live here.

It is the most famous national park, stretching across five countries. In this way, the animals can follow their ancient routes regardless of national borders.

From Praia de Tofo you can book a whale shark safari, a deeply moving and awe-inspiring experience. You can also experience a fantastic beach holiday here, listening to the sound of the waves, surrounded by mangrove forests and palm groves.

One of the most beautiful beaches in Mozambique is here, in Praia do Xai Xai. Palm trees line the white sandy beach, coral reefs delight divers and snorkelers.