Namibia, the land of the red silence

Explorers, adventurers, nature lovers: Welcome to Namibia! A fascinating animal world, the endless Namib Desert, a unique climate – Namibia welcomes you in its very own way and will inspire you forever!

Discover the wild beauty of the country, the dazzling light in the desert and the unique, species-rich animal world!

Grandiose desert landscapes occupy a large part of Namibia. And you will find out: What may sound lifeless to some is a landscape of impressive beauty! The seemingly endless expanse, the incredible wildlife that has adapted to all conditions – unique!

Where is Namibia and what are the special features?

Namibia is located in southwest Africa on the Atlantic. The republic also borders South Africa, Angola, Zambia and Botswana. The country is about twice the size of Germany. From 1884 until the First World War the country was called Deutsch-Südwest-Afrika and was a German colony. That is why some people there still speak English and German today. The country only became independent in 1990, before that it was administered by South Africa. You can discover Namibia in many ways: in a guided (small) group tour, as a self-drive with a rental car or in an individual tour.

The best time to travel: What is the weather like in Namibia?

In the Namib Desert it is warm all year round. In winter (i.e. in our summer months) it can still get cold to below 0 °C at night, while it can get warm to around 25 °C during the day. In December and January, daytime temperatures can easily reach 40°C – too hot for a relaxed desert tour. From November to March there is also the rainy season in the northern third of Namibia with few, but usually very heavy showers.
The main season in Namibia is from December to March. We Africa scouts find: The best travel time for Namibia is from March to October with temperatures between 22 and 30° degrees. At night it cools down pleasantly. April and May in particular are very beautiful in Namibia and there is little going on in the national parks. October is perfect for those who primarily want to observe animals. Because of the drought, the animals make a pilgrimage in large herds to the waterholes. 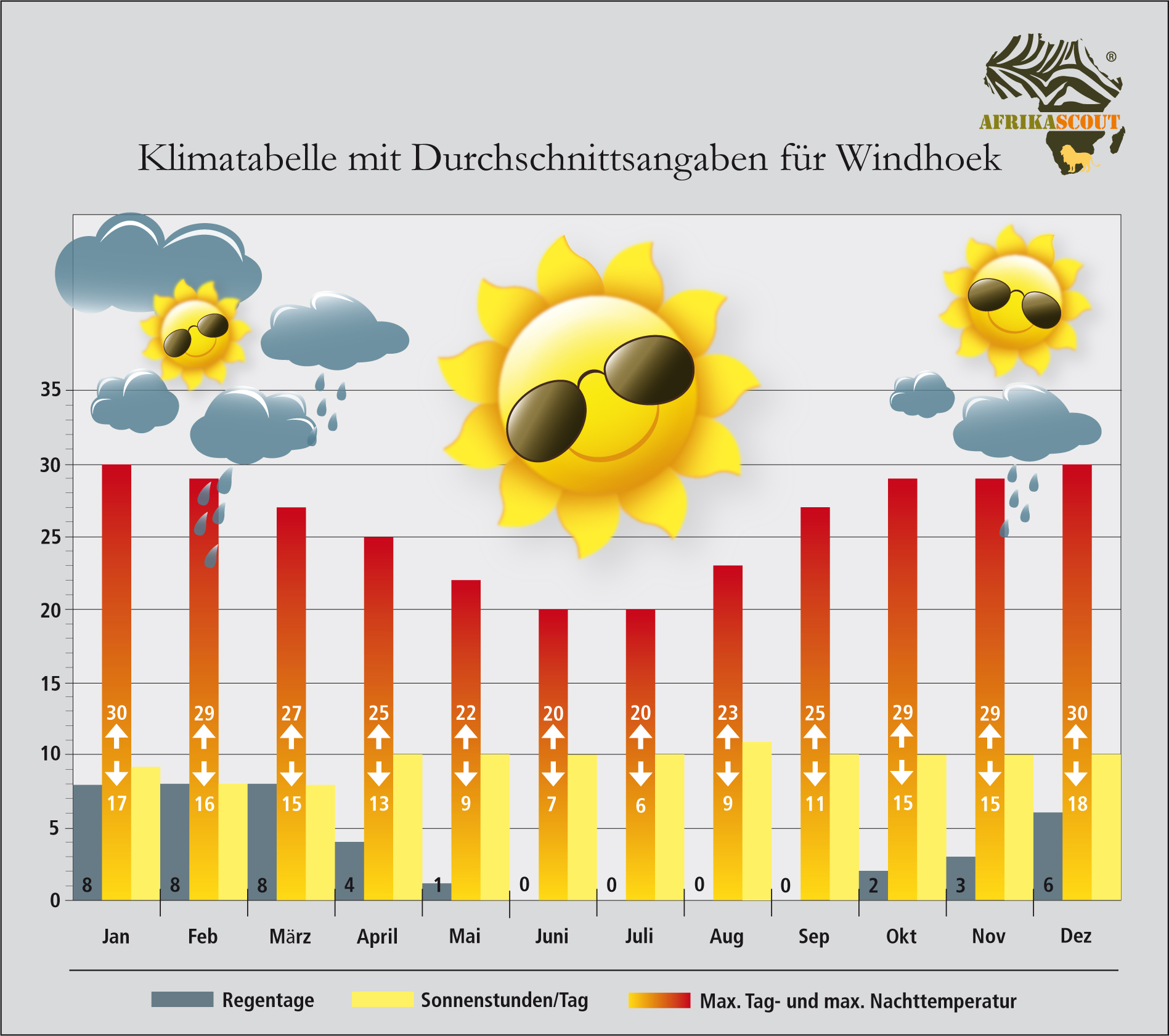 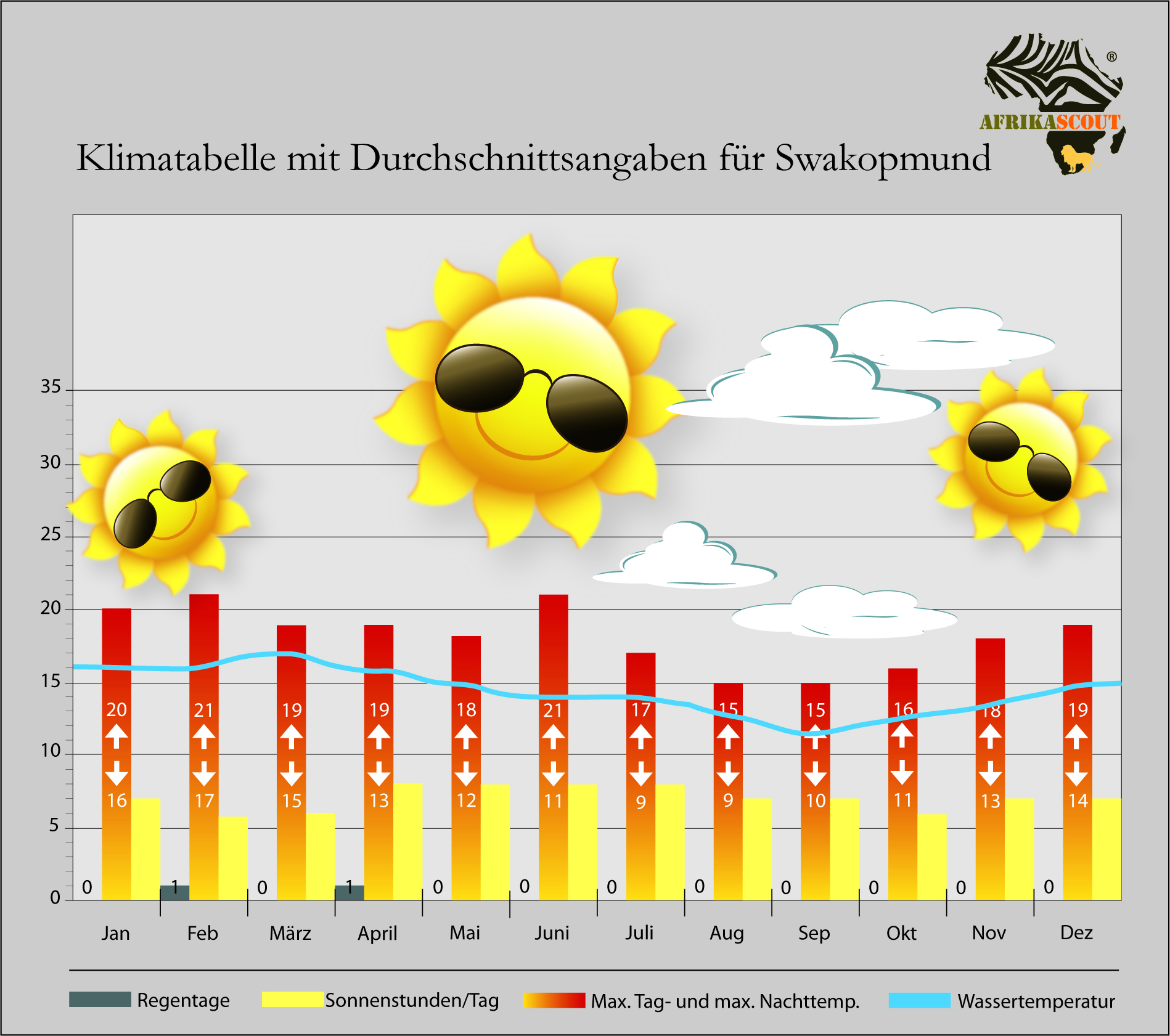 Namibia – From the Caprivi to the Namib Desert l Lodge trip

Who lives there in Namibia?

Fewer than 2.5 million people live in Namibia. Considering how big the country is, that’s pretty little. They belong to different population groups, such as the Himbas. They are the last nomads in Namibia and live in the northwest of the country in Kaokoland, a barren and undeveloped landscape.

Tips, sights and highlights of Namibia:

It is probably the oldest desert in the world. The red sand dunes of the Namib Desert are among the highest dunes in the world at up to 3,000 meters. The world-famous Sossusvlei is a mighty clay basin surrounded by sand dunes. In addition to the vastness, size and quiet grandeur of the landscape, the unique play of colors in the desert, which depends on the position of the sun, is also fascinating. Especially nice: Visit the Namib at sunrise or sunset! Or hike Bushmans trails in Sossusvlei or Deadvlei. A guide will explain how the Bushmen manage to survive in this barren landscape.
Our tip: Experience this unique landscape from above and float over the world-famous dunes on a balloon ride!

In one of Africa’s largest national parks you can spot elephants, zebras, hippos, lions, giraffes, leopards and much more. The landscape consists of savannah and bush forests. By the way: You can even see the huge salt pans of the Etosha National Park from space! Many accommodations here have illuminated water points where you can also watch the animals in the evening.

Windhoek is the capital of Namibia. Many Namibia trips start and end here. the
The city’s landmarks are the Alte Feste, which houses the National Museum of Namibia, and the Lutheran Church of Christ, completed in 1910. There is also a lot of architecture from the German colonial era.

This southern border river with South Africa rises in the Drakensberg Mountains in Lesotho and then flows north-west through South Africa. The section between the border town of Noordoewer and the estuary is particularly scenic; the river valley is almost untouched here. A trip to the Richtersveld National Park is also very worthwhile.

At 650 km, the Fish River is Namibia’s longest river. The associated canyon is about 160 kilometers long and the longest canyon in Africa. It is one of the most impressive natural beauties in the southern part of the state. It is considered the second largest in the world after the Grand Canyon in America. Hiking through the Fish River Canyon is particularly popular. However, hikes are only permitted here in the winter months between May and August, as the river has almost no water during this dry season.

The Skeleton Coast stretches around 500 kilometers from the Kunene River to the Ugab River. Here you can not only find the skeletons of shipwrecks, but also of beached whales.

Numerous flamingos live in the lagoon-like bay. From Pelican Point you can watch dolphins, whales and South African fur seals and harbor seals.

Swakopmund is the southernmost city in Namibia. Since it used to be a German city in colonial times, you can go here in search of traces of the German colonial past. In some places you think you are in an East German coastal town and not in South West Africa.

Large herds of elephants roam this beautiful tropical paradise in the north-east of Namibia, as it is one of the most water-rich and wild animal-rich areas in Namibia.