Millions of hooves migrating through the Serengeti each year following rain and food. A crater so teeming with wildlife it’s like a man-made wildlife park in the middle of nowhere. The beautiful national parks of Arusha, Lake Manyara and Tarangire in northern Tanzania. In addition, the wilder parks in southern Tanzania, which are more of an insider tip.

And towering over everything, the mighty Kilimanjaro. And did we mention the beautiful beaches of Zanzibar?

Tanzania will conquer your heart

Tanzania is something like the treasury of East Africa. On the one hand there are the huge migratory herds of wildebeest, zebra and antelope and the predators that follow them. And speaking of predators: nowhere in Africa are more living per area than in Ngorongoro Crater, the “8th Natural wonder”, as Professor Grzimek once called it. Do you like mountains, trekking and adventure? Tanzania can also offer you that. The mighty Kilimanjaro, its little brother, Mount Meru, the beautiful Ngorongoro Highlands, the Usambara Mountains and many other trekking highlights are waiting for you!
After all the fantastic adventures in Tanzania, Zanzibar finally awaits you: with white, palm-fringed sandy beaches, a turquoise-blue Indian Ocean and a colorful mix of culture, spices and warm hospitality.

Where is Tanzania and what should you know?

Tanzania is about two and a half times the size of Germany and is located on the Indian Ocean in East Africa. It borders Mozambique, Malawi, Zambia, the Democratic Republic of the Congo, Burundi, Rwanda, Uganda and Kenya. The former German East Africa became independent in 1961. In 1964, the regions of Tanganyika and Zanzibar merged, giving rise to the name Tanzania, which is made up of the names of the regions, among other things. There are 16 national parks in Tanzania. Countless elephants, huge herds of wildebeest and zebra, giraffes, predators such as lions and cheetahs and many other animals live here in freedom.
The capital of the country is Dodoma. However, the city was only chosen as the capital because of its central location in Tanzania. Dar es Salaam is the unofficial capital, economic center and de facto seat of government.

And how does it look there?

The East African Rift Valley runs right through Tanzania. Other witnesses of the country’s turbulent past are volcanic craters such as the Ngorongoro crater, mighty mountain massifs such as Kilimanjaro and Mount Meru. Tanzania also borders three of Africa’s largest lakes: Lake Victoria, Lake Tanganyika and Lake Malawi. Tanzania is also known for the endless Serengeti, a huge steppe in the northwest of the country. Wet and dry savannas cover most of the country, along with umbrella acacias and prominent baobab trees.

The best time to travel: What is the weather like in Tanzania?

The best time to travel to Tanzania depends on what you want to experience. Because Tanzania is one of the periodically humid tropics with distinct dry and rainy seasons. Let’s go through the year:
From January to March you can watch the great migration of animals in the Serengeti. It’s summer in Tanzania right now, it can get hot and humid with temperatures up to around 35 °C. The long rainy season follows from March to May. Many hotels and parks close because some paths are impassable. It can be windy and cold and humid. June to October is dry season and tropical winter in Tanzania. The time is perfect for wildlife viewing in the national parks or mountain climbing in the north. The nights are pleasantly cool, the days dry. From November to December comes the little rainy season. For travellers, however, it does not bring any major impairments. However, it will be warm again, up to approx. 35 °C.
Incidentally, the months of June to October and the end of December to the end of February are the perfect travel times for your beach holiday in Zanzibar. 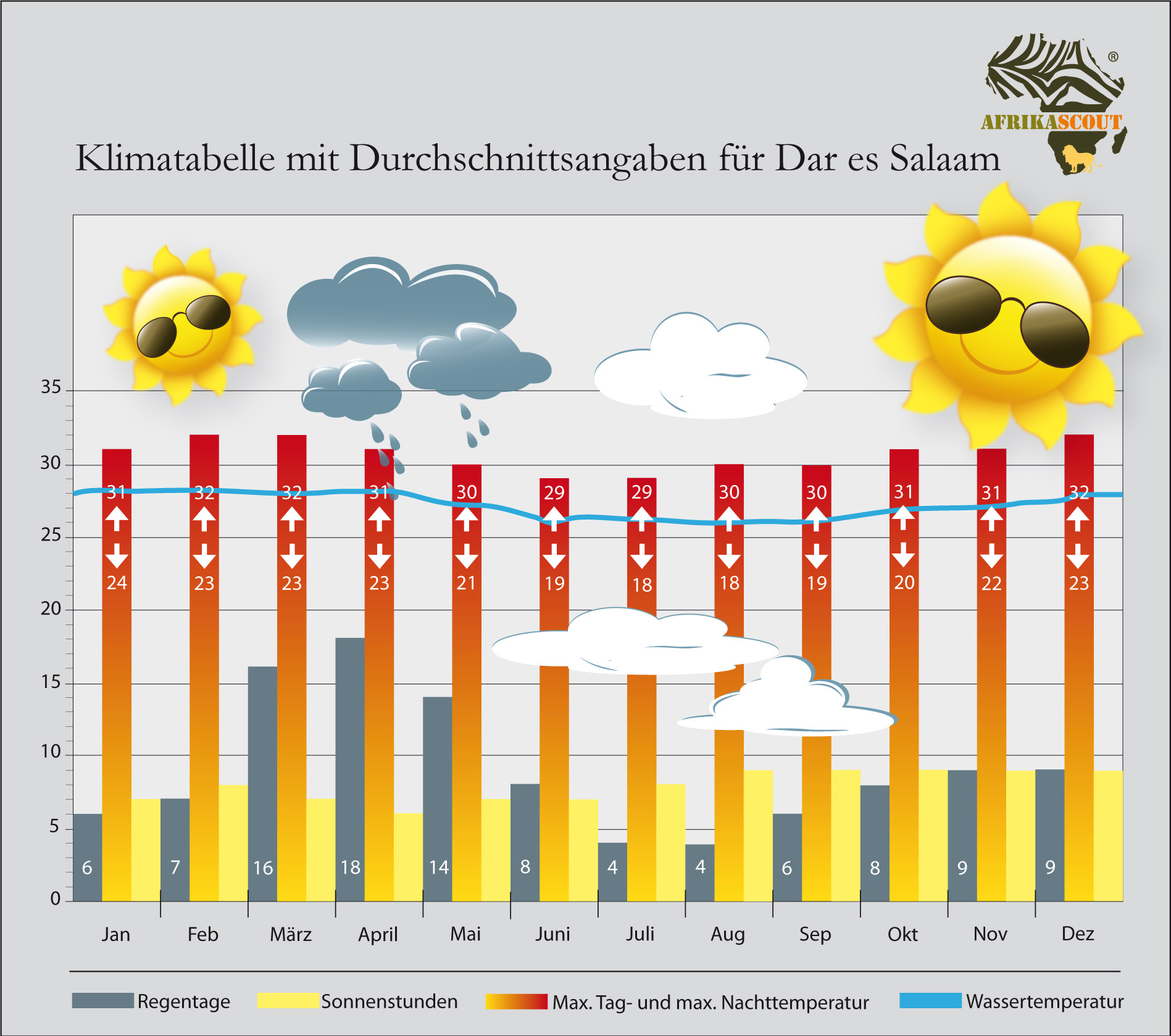 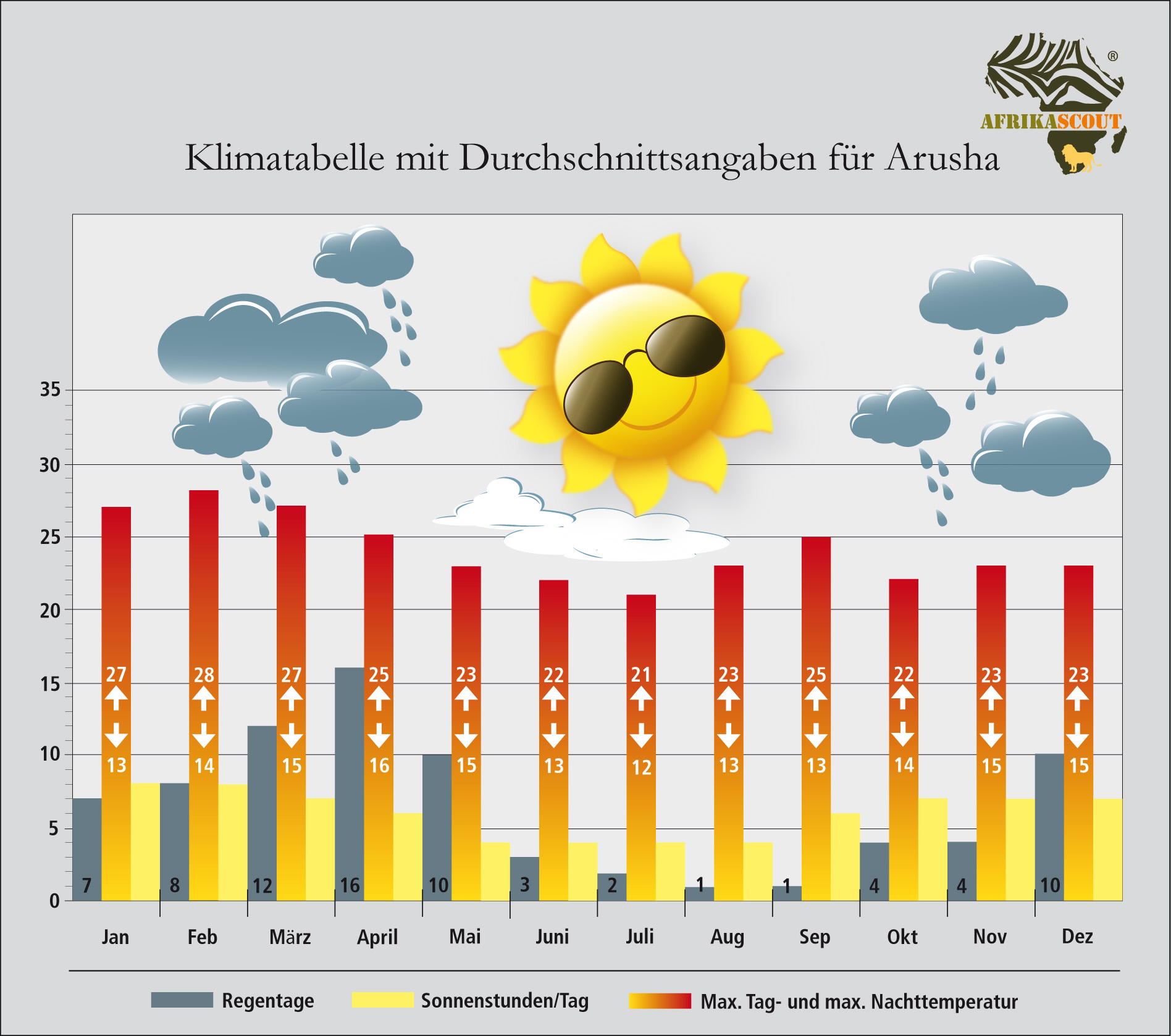 Who lives in Tanzania?

Around 57 million people from over 130 different ethnic groups live in the largest country in East Africa. The Maasai make up around 3% of the population. The people here speak around 125 different languages, the national language is Swahili and English is the lingua franca. Religious affiliation has not been officially recorded since the 1960s. It is estimated that approximately 40% Muslims, 40% Christians and 20% followers of traditional religions live in Tanzania. Around 98% of the population in Zanzibar are Muslims.

The Serengeti. World-famous site of the great animal migration and home of the Big Five. Around three million animals live here in the “endless expanse”, as the Serengeti is translated. Flat grass savannas as far as you can see and a unique natural spectacle: the great animal migration, during which around two million hoofed animals move from the Serengeti to the Maasai Mara and back every year. Their ancient route follows rain and food, as the rainy season transforms the Serengeti into a blooming paradise every year. Professor Grzimek made the Serengeti famous, among other things with his timeless masterpiece “Serengeti Shall Not Die”. Today there are almost twice as many animals as in Grzimek’s time. Buffalo, elephant, rhino, lion, cheetah, leopard and the African wild dog live here in freedom. And you are right in the middle: In the tented camps in the middle of the Serengeti, zebras graze right in front of your tent and at night you listen to the wild animals concert. Simply breathtakingly beautiful.

A fascinating animal paradise awaits you on the edge of the Serengeti: the Ngorongoro Crater, a must for every Tanzania safari trip. The view from the crater rim is simply indescribable. And the abundance of animals is legendary. Not only the “Big Five” live here, but also countless other animal species. With a bit of luck, you may even spot one of the few remaining black rhinos, in addition to countless lions, buffalo, elephants, leopards and many more. The crater was formed from a three-million-year-old volcano that collapsed. This is how the largest crater basin in the world that was not filled with water was created: At 17 x 21 km, the Ngorongoro crater is about half the size of Lake Constance. And it is a true jewel of nature: year-round grass areas and water have led to an impressive variety of animals.

A legend rises in the north-east of Tanzania: the Kilimanjaro massif, the highest mountain massif in Africa. Its highest point, Uhuru Peak (“Peak of Freedom”), is on Mount Kibo at 5,895 meters. It’s the tallest free-standing mountain in the world, and quite frankly, the view is absolutely stunning. The massif, around which numerous myths are entwined, towers majestically over the endless steppes of Tanzania. Kilimanjaro National Park was opened in 1973, and in 1987 UNESCO declared Kilimanjaro a natural world heritage site. The impressive Kilimanjaro is a true paradise for trekking enthusiasts and a dream for mountaineers from all over the world. During the ascent you will hike through all vegetation levels from the rainforest to heathland and alpine deserts up to the glacier zone. And you will be rewarded with a stunning view of Africa and Tanzania at the summit.

Starfish, dolphins, tropical beaches, the turquoise Indian Ocean – the place of longing Zanzibar is just perfect to relax a little after an exciting safari. Dream beaches await you here, some of the most beautiful in the world. Do you like diving or snorkeling? Then explore the colorful coral gardens of Zanzibar or the neighboring islands of Pemba and Mafia Island. With a bit of luck you can even watch whales and whale sharks there. Be sure to make a detour to one of the fragrant spice farms, to the original rainforest of Jozani and to the lively old town of Stone Town and its fascinating mix of different cultures.

Fantastically beautiful and exciting safaris through the Northern Circuit and the large and well-known national parks in northern Tanzania. Whether Arusha, which combines almost all national park landscapes in one park, the “Elephant Park” Tarangire or Lake Manyara, which is also home to huge colonies of storks or flocks of flamingos, depending on the season.

Away from the main routes, great national parks and reserves await you in the south of Tanzania. Explore the almost untouched nature in the wilder sanctuaries and parks of Selous, Ruaha, Mikumi, Kituo and the Udzungwa Mountains! Little traveled insider tips!